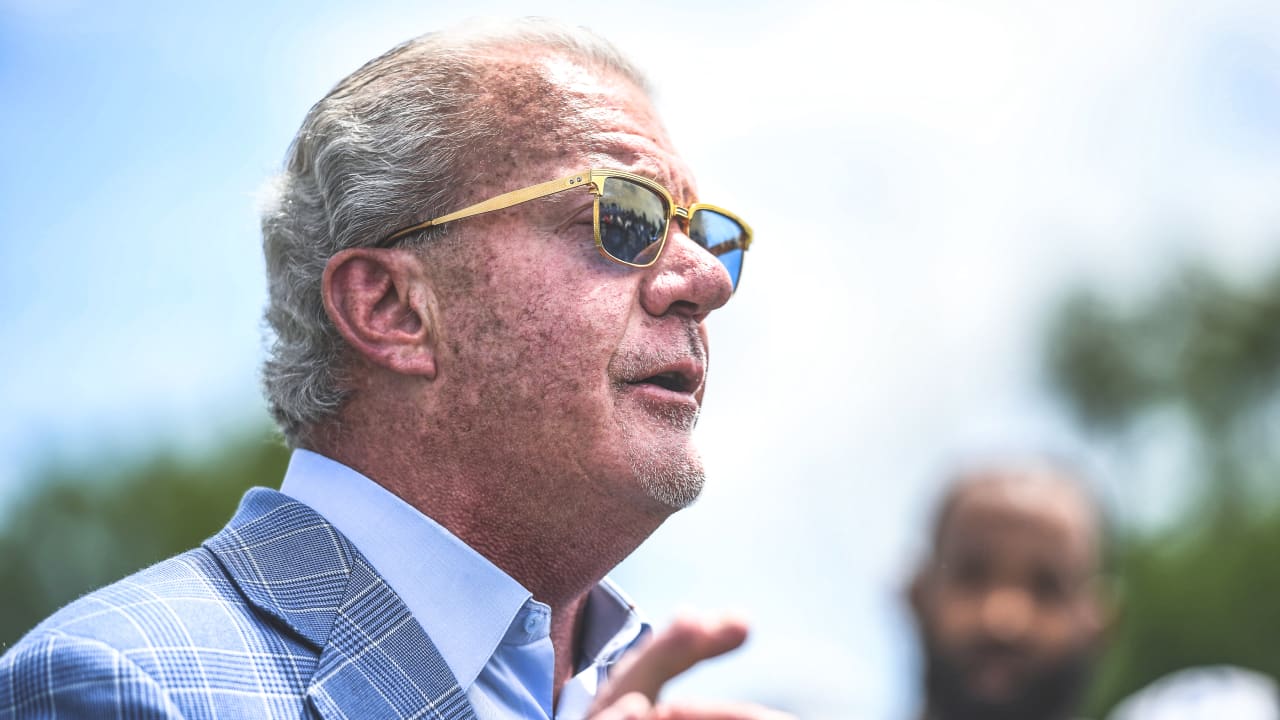 First off, how are you dealing with this COVID-19 health emergency in your own personal life?

Irsay: “I am in self-quarantine, and that’s where I should be. It doesn’t mean I don’t see a couple people, but I take the time to remember that I’m helping my neighbor, my brother and sister that’s in the nursing home — just people that are in difficult situations and this could affect. We saw Sean Payton talk about having it, and that certainly entered our league and that sort of thing, so it becomes a little bit more real. But I like to think of it like, imagine it’s at the end of the game and defense is on the field and you’re up by four points and the clock’s at 30 seconds and the other team’s trying to drive, and together a community rises and screams in unison, and I know that capability’s in Indianapolis, Ind., and this country and in this world. And so we’re looking for greatness, we’re looking for smart people, we’re looking for the scientists, but we have to do our part. Every single person has a responsibility, and we all are, I know, pulling together and trying to do that.”

What led to you offering your million-dollar challenge with Gleaners Food Bank?

Irsay: “Well, I know, Colts Nation knows, that the Horseshoe is looking out and doing everything possible to help things. And I think it’s great because my daughter Kalen mentioned it, and then Gregg Doyel mentioned he had a cough and was kind of at home and a little bit down, so it just came together. And I was also was aware about kids, particularly kids that go to school and depend on their meal at school — no more school, so no more meal. And you can’t have hungry children in this children; you just can’t. It breaks your heart. You can picture some 11 year old, and then that leads to something else negative — they get antsy, they get angry, they’re hungry, and one thing negatively leads to another. But instead, one thing positive also leads to another. And we all have to do our part. I humbly say that, like the woman in the back of the church or man that gives four cents and that’s the only four cents in their pocket, I mean, who gives more, me or them? I mean, I’ve been blessed and I like to share those blessings, and … we look out at the whole community and even the state. If there’s tornadoes down in an area, we’re there with sometimes $100 bills and Colts hats and windbreakers and things and seeing what people need and how we can help. I liken it to that scene — a lot of people may have seen Schindler’s List with Liam Neeson, where he’s realizing, ‘Gosh, if I just could’ve done more … just more,’ and I’m always tormented with that because I just have the heart, and the Colts have the heart, to be there. So we try to do everything we possibly can. Obviously we have great partners in our city — I think Eli Lilly has been a Fortune 500 company and it’s been the biggest company in this city and state, and so I know they’ll do special things and all those sorts of things. So we have great partners in the community — the Pacers are incredible; I’ve talked to Herb Simon, I’ve talked to Roger Penske — and everyone is doing everything they can from a leadership standpoint. But this is clearly a grassroots thing; we’re only as strong as our weakest link, and so I liken it to if you’re gonna to fight the world heavyweight champion, fight him when he’s young not when he’s 21 years old, because that’s what we’re trying to do here: we need to overcome this thing with social distancing and all those sorts of things that they recommend to us.”

Getting to football, the Colts made a big move, trading the 13th-overall pick to the San Francisco 49ers in exchange for DeForest Buckner, one of the top defensive tackles in the league. A big price to pay, but what was your reaction to the move?

Irsay: “I am excited. We have a great football team, and it’s difficult when you trade the 13th pick, but with DeForest Buckner, him and I had a long talk, and I can just tell, Colts fans, he’s special. Just imagine (Darius) Leonard at defensive tackle, the three technique. I mean, the long arms, the knee bend, to be 6-7, to play inside like that’s remarkable. He’s never on the ground, he’s so sudden, even though he’s 6-7 — he’s just really, really, really a remarkable athlete, and quite frankly, I use this this word carefully, but I just can’t even think of anyone that was like him. I mean, to be that size and play inside like that, I mean, you have to realize what kind of athlete you have to be. And he gets double teamed and he still makes plays, because he’s never on the ground and he never quits. And so I can’t be more excited. I mean, look it: we lose the four years — you wish you him at 21 — but, hey, there’s no guarantee, even as good as Chris Ballard is, that at 13, at that pick, that we’re gonna get a guy this good. He’s special — he’s special, and he’s a special leader, and him and Quenton Nelson and Philip Rivers, I mean, these guys are special leaders, and so is Leonard and a lot of guys on this football team that take it upon themselves to make sure they’re inspiring their teammates and coaches, etc., the fans, to produce greatness, because that is special.

Then you utilize free agency to bring in a veteran quarterback in Philip Rivers, a guy your own team has had plenty of noted battles with in years past. What made you confident that Rivers, at 38, was the right guy for the job at this point in time?

Irsay: “When we played him last year, Frank Reich told him, he said, ‘My God Philip, you missed one throw the whole game.’ … I tell ya, I believe Philip is a young 38. We see guys like Drew Brees now, and Tom Brady, playing and doing great things after 40. It won’t even be until 2021 (in) December when Philip gets 40. So I think he is a guy with elite leadership, a great release, and what makes it so good is I feel we have the best offensive line in football, and that’s the thing that takes a long time to build. And so quietly behind the scenes, while we’ve had this and that and the other — and certainly (2018) was special, winning nine out of 10 and winning a playoff game on the road; I mean, that’s rare — but I’ m just saying that the offensive line — and the defensive line; Chris Ballard says this over and over — that’s what he really tends to, and thank goodness because if you don’t have an offensive line, that could take three years to build. But you can add skill players, and I think DeForest, really, changes the defensive line and the whole defense, because now you have two elite players with Leonard and Buckner, and there’s other players that want to make that statement and say, ‘Hey, I’m elite too. Watch me,’ guys like (Kemoko) Turay and those guys at safety, and I think we think of the world of some of these young guys and we think they’re going to light it up.”

Do you think Quenton Nelson, right now, is a top-ten player in the NFL?

Irsay: “I think there’s no question. He’s a rare player, and, I mean, look it: the truth is that I think if he can duplicate the next 10 years like he has the past two years, going through his rookie year to greatness and all those things, I mean, the bottom line is that he’s gonna be in Canton next to (John) Hannah. I mean, it’s just that simple. Everyone knows how different he is. I mean, he is really, if not the face of the franchise, I think he represents what we’re about, and that’s a physical football team, someone that — it’s tough, because I remember a drive against Houston in the third quarter, and it was just so incredible; we were just beating people up front and you know what we were going to do in running the ball and they still couldn’t stop us. And that’s special.”

One of the best stories out there that maybe some don’t realize is just how important Jake Plummer was to the Colts getting Peyton Manning with the No. 1-overall pick. Care to elaborate?

Irsay: “I’m trying to negotiate to get Bill Polian here, and we’re moving forward and those sorts of things, and I know I’m making big changes, and I know the quarterback’s the key and that sort of thing, and I know it’s about having the No. 1 pick. So we lose to the Vikings, I come home … and now Arizona’s playing, and Jake Plummer, they have to win the game to put us into the No. 1 pick. Literally, literally, with seconds to go, Plummer hits the guy with the pass in the end zone, and we flip from 2 to 1, and I went screaming like a madman, and my wife and kids — and the kids were smaller back then — they’re like, ‘What the hell was wrong with you, dad?’ I called Bill Polian and he still didn’t understand, because I had known that if you’re at 1 or 2 you want 1, you want to be able to control your own destiny and you want to trust you’ll make the right choice. And that changed Colts history forever. Isn’t that something? You come back and it doesn’t look good, and then Jake Plummer does that, and then Peyton Manning comes in and the rest is history. I mean, I don’t know what to say except that I know that we’re responsible for the effort, and God’s responsible for the outcome. And God loves football too, and we refer to the football gods because we know that we think we control everything — well, we don’t. I mean, we don’t control everything, but we know that we control our part, and then good things happen with hard work and staying ready to take advantage of any opportunity that’s there for your franchise.”

What do you hope Colts fans are feeling about the future of this franchise?

Irsay: “I know Colts fans are excited, I know everyone questions, ‘Should we have traded the 13th pick? Is Philip Rivers, is that really the guy?’ You don’t know. I mean, you don’t know what’s gonna happen. … (But) we’re just so much better now, Colts fans. … I told Chris Ballard, I said, ‘Look, the best thing we do is you draft great young players, and Frank Reich the coach loves to coach young players, and he’s not afraid of that.’ So some of this, on the Buckner thing you could say it’s a little contrarian to our principles — it is, but (it’s) not … It’s just the bottom line is that when you look at it, it’s just something that we’re so much better and we still have seven picks, including 34 and 44, and so there’s other trades that Chris and I and Coach (Reich) have locked down under the hood over, and sometimes I have to say if it gets super radical — ’cause we had a super radical thing going down — and Chris and I and Frank really huddled hard, and we always come out 3-0. We do. We support each other, and I support them. But sometimes — sometimes, as Bill Tobin once said — owners own.”

Four options for the Dallas Cowboys at slot…